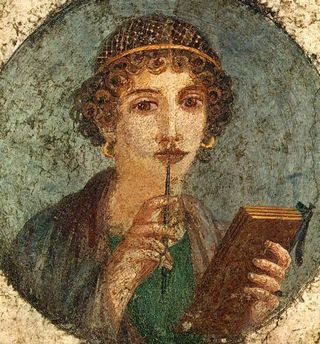 Click MORE below for a full translation of this composite epitaph.

Meleager was born in Palestine, in Gadara. A consummate man of letters, he added hundreds of first-rate epigrams to the Greek canon and also compiled and edited the motherlode manuscript of the epigrammatic tradition, on which all subsequent versions of the current Greek Anthology are based. In his own epitaph, over two thousand years old, he presents himself as a man of the World and suggests his readers take an all-inclusive view of the Human Family.

My father was Eucrates.
Meleager is my name.
Born in Gadara, Palestine
I came of age in Tyre.

A Syrian?
Don’t be surprised.
All men share one homeland
Called the World.

If you’re Syrian, Salam!
If Phoenician, Haudoni!
If Greek, then Xaire!
Hail! And wish

The ancient babbler well.
May you
When you grow old
Be this loquacious!

(I wrote these lines in my notebook
Before they buried me.
Old age and death
Are next-door neighbors.)

I await the book.

Johns Hopkins University Press has moved the publication date for the Greek epitaphs collection to December, 2013. Thanks for your patience.

There was no Palestine when the Greek poet Meleager was born in Decapolis. However, Jews and Greeks lived together in Gadara. THE JEW JESUS HELPED ONE OF THE GADARENES.

Palestine: Wikipedia."The first clear use of the term Palestine to refer to the entire area between Phoenicia and Egypt was in 5th century BC Ancient Greece.[6] Herodotus wrote of a 'district of Syria, called Palaistinê" in The Histories, the first historical work clearly defining the region, which included the Judean mountains and the Jordan Rift Valley."

Announcement from PEN America Center: Cut These Words Into My Stone has been long-listed for this year’s PEN Award for Poetry in Translation.