Michael Wolfe (Born 3 April 1945, United States) is a poet, author, and film producer. Now and then Wolfe has taught writing and literature, at Phillips Exeter Academy, Phillips Andover Academy, the California State Summer School for the Arts, and at the University of California, Santa Cruz. He is an occasional speaker on Islamic issues at universities including Stanford, Harvard, Georgetown, SUNY Buffalo, and Princeton. He holds a degree in Classics from Wesleyan University.

POETRY & FICTION
Wolfe was a MacDowell Colony resident in poetry in 1968. Among other awards, he received an Amy Lowell Traveling Poets Scholarship in 1970, which was renewed for two further years. During this time he traveled and wrote in North and West Africa. His first books of poetry, fiction, and travel derive from this period. In the 1980s, he returned to North Africa several more times. All published books and articles are listed below.

His most recent publications have been three poetry chapbooks (2013, 2015, 2016), and a book-length collection of translations: Cut These Words into My Stone: Selected Ancient Greek Epitaphs, Translated and Introduced by the author, with a Foreword by Richard P. Martin, published by Johns Hopkins University Press in 2013.

Current book projects include a fictional memoir, The Motorbike, a fourth book of poetry, Digging Up Russia, and a work of historical fiction, The Paris Mosque.

NON-FICTION
Wolfe's nonfiction works include a pair of books from Grove Press on the pilgrimage to Mecca: The Hadj: An American’s Pilgrimage to Mecca (1993), a first-person travel account, and One Thousand Roads to Mecca (1997), an anthology of ten centuries of travelers writing about the Muslim pilgrimage to Mecca. Shortly after September 11, 2001, he edited a collection of essays by American Muslims called Taking Back Islam: American Muslims Reclaim Their Faith. The book won the 2003 annual Wilbur Award for ‘Best Book of the year on a Religious Theme.’ For four years, he wrote an occasional column for Beliefnet, a Web journal of the world’s religions.

TELEVISION
In April 1997, Wolfe hosted a televised account of the Hajj from Mecca for Ted Koppel's "Nightline" on ABC. The program was nominated for Peabody, Emmy, George Polk, and National Press Club Awards. It won the annual Media Award from the Muslim Public Affairs Council. In February 2003, Wolfe worked with CNN International television news reporter Zain Verjee to produce a new half-hour documentary on the Hajj. Wolfe has been interviewed on hundreds of regional and national radio and television shows.

In 1999, Wolfe and Alex Kronemer co-founded an educational media foundation called Unity Productions Foundation (UPF). In 2002, UPF produced its first full-length film, entitled Muhammad: Legacy of a Prophet, a two-hour television documentary on the life and times of the Prophet Muhammad. The film, directed by Michael Schwarz, which Wolfe co-created, co-produced, and co-executive edited, received a national broadcast on PBS and subsequent international broadcasts on National Geographic International. It was awarded a Cine Special Jury Award for Best Professional Documentary of the Year in its category of People and Places.

Wolfe continues to produce long and short-form documentaries for PBS and other broadcasters in the US and abroad in collaboration with Kronemer and/or Unity Productions Foundation. In 2007 and 2008, he co-produced two new films for national broadcast on PBS: The first, a two-hour historical documentary entitled Cities of Light: The Rise and Fall of Islamic Spain, and the second, an hour-long historical documentary entitled Prince Among Slaves, the true story of an African prince enslaved in antebellum Mississippi. He also co-produced a trio of hour-long documentary films on individual American Muslims pursuing their dreams in post-9/11 America: Talking through Walls, Allah Made Me Funny, and On a Wing and a Prayer.   All were financed by The George Russell Foundation's "One Nation" project and broadcast on PBS between 2008 and 2010.

In 2009, he co-produced Inside Islam: What a Billion Muslims Really Think, a one-hour documentary based on the results of the Gallup Organization’s eight-year poll about Muslims around the world. Islamic Art: Mirror to the Invisible World, a ninety-minute documentary on civilizational art, aired nationally on PBS in June, 2012. In 2014, Enemy of the Reich, a documentary concerning Noor Khan and the French Resistance, aired on PBS. In 2016, The Sultan & the Saint, a one-hour historical documentary about St. Francis of Assisi and the Crusades, aired nationally on PBS and has been shown across Europe and Asia. Currently, Wolfe, Kronemer, and the UPF team are embarked on their first animated feature film, Lamya's Poem, about a young girl fleeing war-torn Syria and the 800-year-old poem that saves her life. 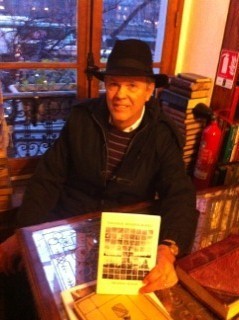